In a shocking turn of events, Ghislaine Maxwell, friend, and companion of famous financier Jeffrey Epstein has been arrested by the FBI. The popular New York socialite was arrested in connection with Epstein’s sexual abuse cases although Maxwell denied the charges, saying she knows nothing about it.

The arrest comes 1 year after a federal investigation began on Epstein’s sexual abuse of minors in Manhattan mansion. However, Epstein committed suicide by hanging from his ceiling, a month after this in August last year but the FBI continued with the investigations

The daughter of a publishing magnate and a fixture in New York’s social scenes was arrested in New Hampshire where she was hiding. She has been charged with luring multiple underage girls. The girls were as young as 14 and were easily lured to this. Many a time Maxwell, herself participated in the abuse. This arrest has added a new twist to the ongoing legal saga which has become a cult international conspiracy theory in no time. Many prominent public figures including British Royals, politicians, and businessmen have become embroiled in it.

FBI tracked down Maxwell after months of chase

The authorities had been tracking Ms. Maxwell’s movements and had recently learned about her relocation to the New Hampshire home, an F.B.I. official said.

How did Maxwell do it?

According to a New York Times report, Maxwell lured the teenagers by becoming a friend and taking them to shopping and movies. She would enquire about their family, friends, and school. She even went on the extent of undressing in front of them asking them to be part of sexualized massages for Epstein. She trapped these teenagers in the same pattern for several years in the early 1990s feeding the desires of Epstein.

According to the Indictment report, MaxWell would 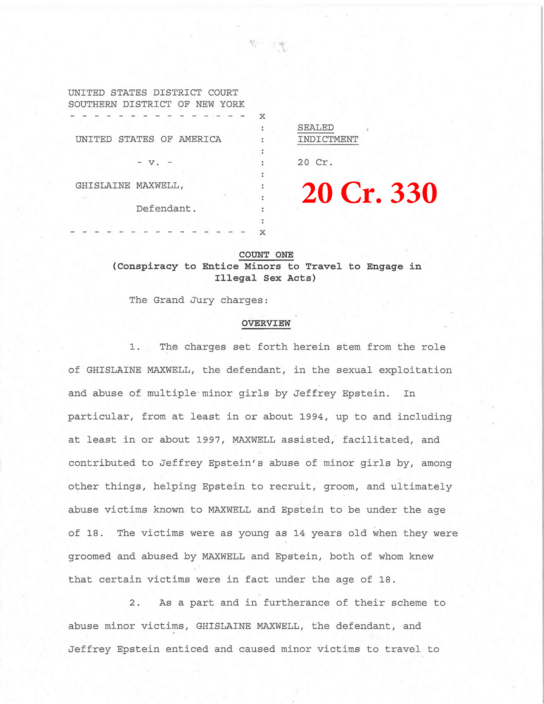 The 18 page long indictment statement charged her with 6 counts including transportation of minors with the intention of engaging them in criminal sexual activity. There are additional charges made against her statements given during Epstein’s 2016 sex trafficking case.

“Maxwell enticed minor girls, got them to trust her, then delivered them into the trap that she and Epstein had set for them,” Audrey Strauss said.

According to a BBC report, the charges labeled on Maxwell can result in 5-6 years of prison sentence while the transporting minor charge can lead to 10 years of prison.

“assisted, facilitated, and contributed to Jeffrey Epstein’s abuse of minor girls by, among other things, helping Epstein to recruit, groom and ultimately abuse victims known to Maxwell and Epstein to be under the age of 18”.

Specifically, she is charged with:

According to the Federal law, the government can prosecute any sex offenses relating to a minor as long as the victim is alive and the case can be prosecuted at any point during the victim’s lifetime

Maxwell was present in the court when the magistrate announced that she should be detained and sent to New York as proceedings were pending there.

NFL will test players daily until the premiere of the 2020...