The latest investigation report from the CDC regarding the Salmonella Outbreak from Onions highlights the extent of the infection.

As of August 6, 2020, a total of 640 people infected with the outbreak strain of Salmonella Newport have been reported from 43 states. A list of the states and the number of cases in each can be found on the Map of Reported Cases page.

HOW DID IT HAPPEN? 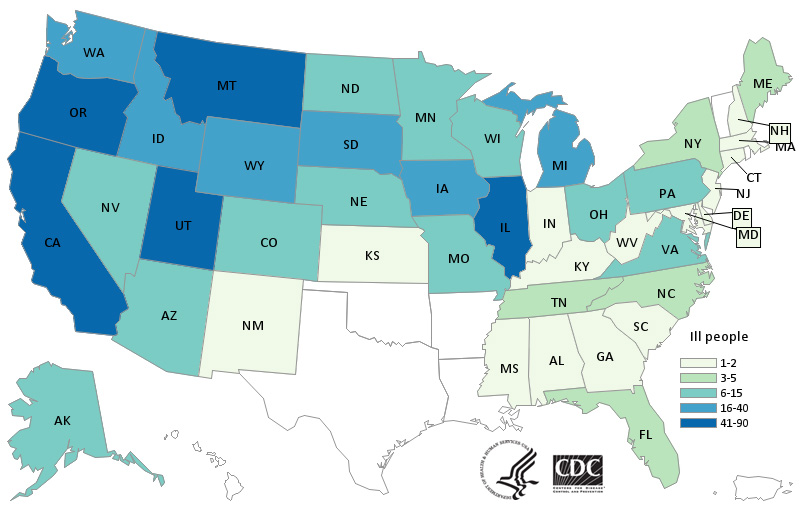 Illnesses might not yet be reported due to the time it takes between when a person becomes ill and when the illness is reported. This takes an average of 2 to 4 weeks.

Whole genome sequencing analysis shows that an outbreak of Salmonella Newport infections in Canada is related genetically to this outbreak in the United States.

This means that people in both of these outbreaks are likely to share a common source of infection.

HOW WERE THE INVESTIGATIONS DONE?

On July 10, 2020, CDC’s PulseNet identified an outbreak of 13 Salmonella Newport infections in three states. Since being identified, the outbreak has rapidly grown to a total of 640 infections in 43 states.

State and local public health officials are interviewing ill people to determine what they ate and other exposures in the week before their illness started.

TIMELINE OF THE INVESTIGATION

Public Health Agency of Canada (PHAC) is investigating an outbreak of Salmonella Newport infections in Canada that is related by whole genome sequencing to the U.S. outbreak. On July 30, PHAC’s outbreak investigationexternal icon identified U.S. red onions as a likely source of its outbreak.

DIRECTIVE FOR THE PEOPLE

Consumers, restaurants, and retailers should not eat, serve, or sell recalled onions from Thomson International, Inc., of Bakersfield, California, or other foods made with recalled onions.

CDC will provide updates when more information is available.

Brittany Long - Modified date: Friday, 30 October 2020, 19:59 EDT
0
Jason Derulo admitted he only spent 60 days at home last year because he was working and the pandemic has made him re-evaluate how...

Scarlett Johansson and Colin Jost’s handwritten save the date invites to...

Jameela Jamil: My clothes allow me to be a new person