There seem to be no end to police brutality on black people since George Floyd’s death in police custody and the consequent escalation of the Black Lives Matter movement.

A man’s leg may need to be amputated after the Salt Lake City Police Department allegedly used excessive force against him by ordering a police dog to bite the man repeatedly, leaving him severely injured, reports CNN

Attorneys for Jeffery Ryans, 36, say a police officer “commanded his K9 … to attack Ryans unnecessarily and for an extended period of time” back in April. Salt Lake City Police say they are investigating the incident internally.

Why This Attack on the Victim?

“My dad is doing very bad things to our family,” the daughter says.
“He’s yelling and screaming,” she says, as raised voices are heard in the background.

“Did he strike your mom?” the operator asks.
The daughter answers: “Yes.”
Asked by the operator if her father lives at the house, the daughter replies, “No, he has a restraining order.”
One of Ryans’ lawyers, Daniel Gardner, confirmed to CNN that there was a protective order in place but said the couple “were under the impression that it had been lifted because that was the wishes of Mrs. Ryans.”
At one point in the video, after an officer mentions the protective order to Ryans, he tells that officer that his wife “said she lifted it off.”
“[Ryans and his wife] did not understand that a judge is the only one that can lift a protective order,” Gardner explained.

Police asked Ryans to leave the house, according to body-worn camera footage from the incident provided to CNN by the man’s attorneys and Salt Lake City Police. They also spoke to his wife, who confirmed that she has a protective order and told officers that Jeffery was in the house when she got home.

When the officers found him in the backyard, one of the six officers tells him “you’re not supposed to be here Jeffery.”
“Alright, well she let me in,” he claims. Several officers can be heard ordering Ryans to “get on the ground.” One officer says that Ryans tried to jump the fence.

Man Surrenderd But Police Ordered the Dog To Bite 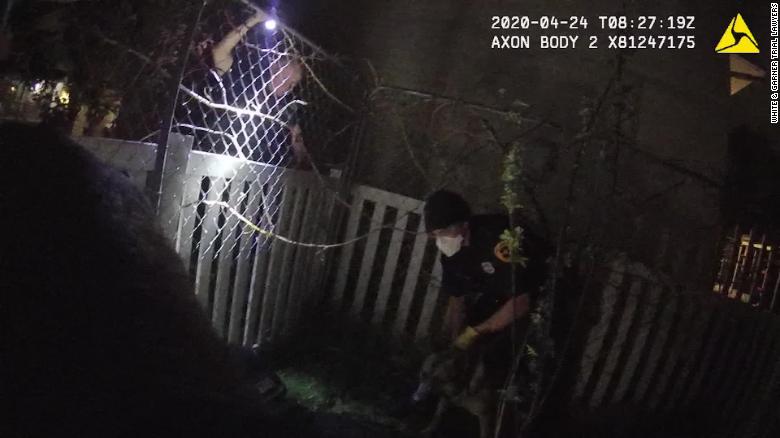 Ryans was approached by Salt Lake City Police Officer Nickolas Pearce who “ordered his German Shepherd to bite Mr. Ryans repeatedly while he was on his knees with his hands in the air,” his lawyers say.
Body camera video from the incident shows Ryans lying on the ground protesting and exclaiming in pain as a dog bites and tugs at his left leg. One officer is seen handcuffing him while another officer repeatedly says “good boy” to the dog.

“Why are you biting me?” Ryans screams on the video at one point.
As Ryans is on the ground being handcuffed, an officer can be heard saying “we need medical for a dog bite” over the radio.
Ryans, a locomotive engineer, says several times throughout the incident that he was trying to get his work clothes from the house.

Salt Lake City Police Department said that no complaint was filed with their Internal affairs department immediately after the incident.
“However, when senior leadership became aware of the situation [Tuesday], they immediately launched an Internal Affairs investigation to determine if the use of force was within policy and why the use of force was not referred to Internal Affairs at the time,” the department added in their statement on the incident.

The Mayor of Salt Lake City, Erin Mendenhall (D), said she was “deeply concerned that it took a news outlet publishing this video for it to be brought to the attention of senior police department leadership and myself,” in a tweet yesterday.
“I am disturbed by what I saw in that video, frustrated by how the situation was handled, and am committed to working to ensure neither happen again,” Mendenhall added.
Pearce has been placed on administrative leave pending the results of the investigations, the police said in their statement.
Ryans had to be taken to the emergency room after the incident and has had several surgeries for his injuries from that night, his lawyers say.
“His doctors have informed him that his leg may need to be amputated as a result of his injuries,” their statement added.

The claim notice Ryans’ lawyers sent to the city says he has nerve, tendon and muscle damage.
A formal lawsuit has not yet been filed in court.